Yesterday, the virtual magazine ‘Viure als Pirineus’ or ‘Living in the Pyrenees’ published an article about the roots, origins and continuation of the saga of Hotel Cardós. An hotel called a museum by some journalists, a familiar hotel that makes customers their friends, and a hotel where rest, peace and nature could be find in one place, no matter what time of the year you go, you will always find something special.

One of the most beautiful and interesting extracts from the article reads: “On July 25, 1936, Maria Pedrico Ninou daughter of Casa Cintet and her husband, Antonio Gabriel Bohí of Casa Agostino, opened in Ribera de Cardós, on the road , the brand new Hotel Modern, a hotel that already had in those times of hot water and shower. It was a Saint James day, just one week after the July 18 coup, a bad time to start the new period , after years making the inn in the old house of Ribera.”

Hotel Cardós has a great story on its shoulders that reflects the variety and fun of old and collector’s objects, such as a gramophone from the 20’s, hundreds of paintings by artists who have once have been customers and friends of the hotel or thousands of manger figurines. 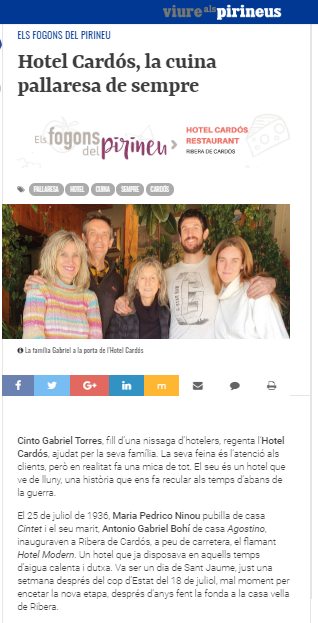 We invite you to spend a stay at our hotel to discover all these little treasures and be part of our history.